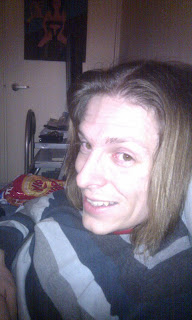 Watching rastamouse with a pal and a beer - awesome!
Posted by Andy Onions at 22:36 No comments:

Our mate Tehoue has just arrived from Belgium on the Eurostar. He likes watching DVDs on a laptop to pass the time when travelling and nice guy that he is he always carries a spare set of headphones so the person sitting next to him can watch with sound rather than peering over his shoulder trying to guess the dialog as they often tended to do.

Tehoue takes his seat next to an well-dressed elderly black gentleman and rummages through his selection of DVDs. He spies one he has heard is good but hasn't seen. He blames the fact he hasn't seen in on the fact that living in Belgium is quite like living on the moon on a quiet day.

Interesting thing about Belgium is that their parliament has still not formed a proper government, so there is a campaign to get the wives and husbands of the MPs (or whatever they have in Belgium, I was only half listening) to impose a sex ban until they sort one out. This was tried in Kenya before apparently and solved a long impasse in 2 days flat. Lets try that in Egypt eh, maybe that'll sort em out. Dunno what they're moaning about. Britain hasn't elected either of the last 2 prime ministers and you don't see us complaning, well you do, but that's because we're always complaining. Anyway, enough of the ill informed polictal satire combined with lazy national sterotyping, back to the story about the Belgian, the old black man and the Bruno DVD (a working title for the Lion the Witch and the Wardrobe II I'm sure)

For those of you who know the start of the film well you've probably already started cringing for Tehoue. Tehoue did some cringing of his own. It was about the time where the comically offensive gay character of Bruno was asking an unsuspecting black man to get his knob out because "that's what black men do best" (or something to that effect) that the cringing hit Tehoue like a Peep Show marathon followed by a double episode of The Office. The old black man turned white (not albino white, but white for a man with dark skin) Without speaking Tehoue pulled the plug on his laptop and popped it away.

With a full train and no way of escape to the refuge of an empty  seat, the next 2 hours passed in silence.

Tehoue says he will keep the 2nd set of headphones buried deep in his bag on the journey home.

The elderly black man eventually returned to his normal colour.
Posted by Andy Onions at 23:54 No comments: 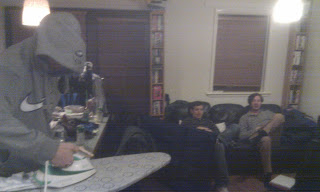 Our mate Tehoue has arrived from Belgium to sit camply on our sofa next to my housemate Logan, whilst a mystery hooded individual irons his Sunday work shirts. It's my unseen 3rd flatmate BCNB
Posted by Andy Onions at 22:46 No comments:

Alright, so here we are, Sunday evening, the worst time of the week. You'd think it'd be a great time to reflect on all the fun and revellry which was had over the weekend but no. It's ages till the weekend, there's work tomorrow and it's a highly inappropriate time to get drunk. Boo his Sunday evenings, and oh dang it's Songs of Praise followed by double Top Gear. 116 hrs 8 minutes 6 seconds before hometime Friday and the happy world starts again...
Posted by Andy Onions at 20:51 No comments:

The Comic Capers of Andy Onions

Hello Blog. Today (Saturday) I did a comedy workshop in Camden Town, London and had a great time. Then I had a beer and a crepe, saw some friends and went home for some herbal tea. Then I setup up this blog and a website. It's a cracking start to The Comic Capers of Andy Onions, things can only get better from here on in. Perhaps I'll try and learn how to set the website up, or maybe I'll have another cup of tea. If that tickled your funny bone sign up to twitter, andyonions or @andyonions or whatever it is. I geninuely don't understand it fully - do you put the "@" in or not. Sure it probably doesn't matter.

I'll also be doing some gigs, I'll put them up here when I can work out how to make another page on the site. How can this fail?
Posted by Andy Onions at 01:29 No comments: